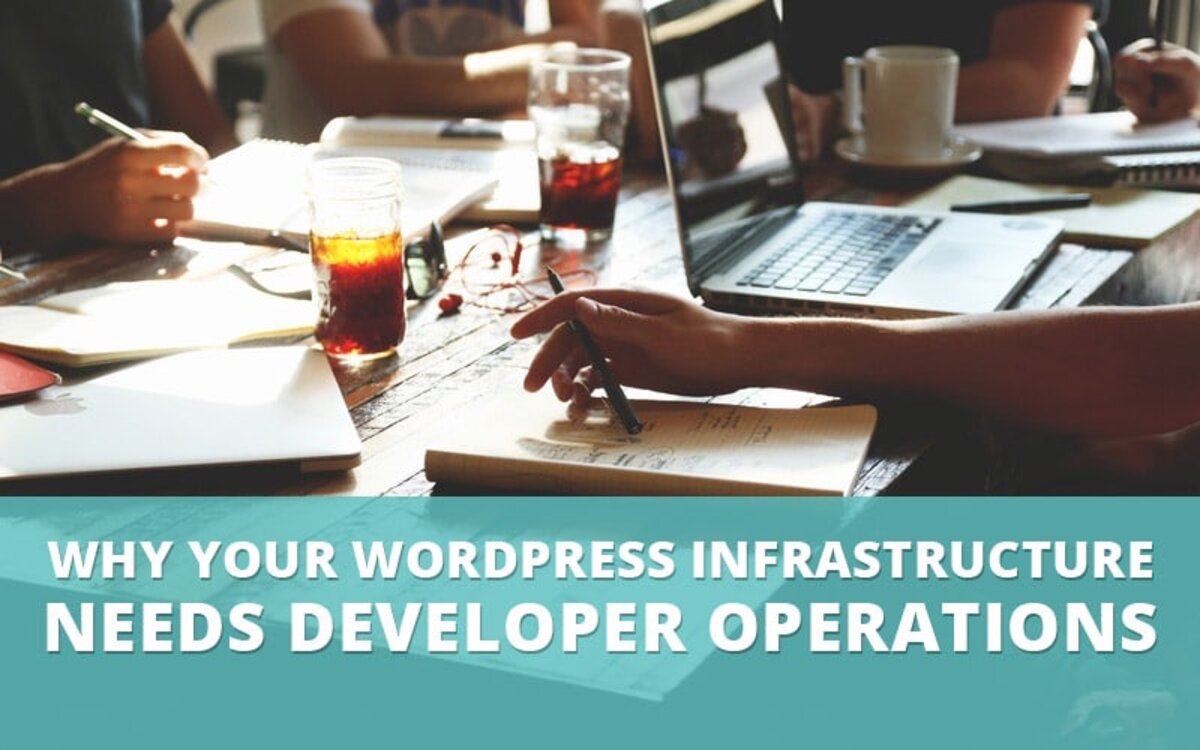 In between the software releases, the maintenance team would take over to ensure that everything ran smoothly until the next update happened. It was all very quaint, and an outmoded model for software infrastructure.

Nowhere is this truer than on WordPress (WP) sites. Because of the constant nature of the updates to the platform, along with all of the plugins and themes, it shifted how developers work with the update model.

The biggest change is the rise of the Developer Operations (DevOps) model.

Since the advent of Developer Operations the idea of periodic updates has been thrown on its head. Instead of regularly scheduled updates, developers and IT operations merge together to constantly update systems as needed.

32% of the top million websites now run on WordPress, as adoption grows, especially in the Enterprise, DevOps for WordPress is going to become a must.

What Is WordPress DevOps?

The term DevOps is so new that it is still being defined. However, the most common definition is “Continuous improvement, feature releases and updating of an app or website to ensure smooth functionality without downtime or disruption.”

Consider a large, enterprise WordPress user like New York University. With a WordPress multi-site install of over 2,000 blog installs, it needs far more than the occasional click of the “update” button to maintain.

Also consider that if NYU’s blog network goes down, the impact could affect thousands of students, professors, and faculty who rely upon the website for their daily activities.

Adding new features while maintaining system reliability takes planning and adherence to strict standards. When we refer to DevOps for WordPress, we are most often talking about the implementation of these standards around everything from testing to how often new code gets pushed and how that code should be structured.

With over 40,000 feature possibilities in the Plugin Repository alone, not to mention quarterly core updates and the ever-evolving needs of your company’s web presence, DevOps for your WordPress is a must.

When to Hire a WordPress DevOps Team

When exactly should you look into hiring a DevOps engineer or team for your enterprise? Do you need to wait until you have 2,000 sites?

Generally, most of the companies that need DevOps have three specific needs.

First, the site is mission or revenue critical.

Take craft and vintage ecommerce site Etsy. The site generated over $200 million in revenue in 2014, and still deployed over 50 changes to the website every day last year.

When you break down the 18,000 plus changes Etsy made to their site, you realize they how these daily small changes completely change the look and feel of the site throughout the year.

Compare that with a normal small business that besides for a few blog posts, might make major changes once every year or two. In the time it takes for a small business to change their site once, a site like Etsy probably redesigned their site a dozen times or more.

If your website is looking to scale the size and scope of your site, then you need a DevOps team to protect your online revenue base. Often a company realizes the importance of a good DevOps team when they end fixing and adding features on a consistent basis to the website.

Take Amazon’s AWS services. They have a large DevOps team to ensure the changes they make to their site daily are implemented accurately.

Amazon Web Services powers hundreds of thousands of websites around the world. In all of 2014, they only had 2.41 hours of downtime. That means the system was up and running 99.9974% of the time.

The power of DevOps is that you are able to make continual changes to a large network of sites without all of the glitches of the big launches and updates of yesteryear.

Third, you currently have no internal oversight over multiple projects or vendors (or both!)

Traditional launches used to silo launch developers from IT maintenance. However, it made no sense to have multiple projects going at the same time without one central hub.

By incorporating both together, a business can reduce costs through having two separate teams. Sort of like an internal merger for a company. Plus, by having one team responsible for the entire update and maintenance of the website, you have less friction moving forward with updates.

What Should My WordPress DevOps Team Be Doing?

Before hiring or contracting a DevOps team, consider what it is you need from them. As discussed earlier in the article, your DevOps team ensures your current WordPress site works smoothly, but they are much more than just developers.

Make sure that you have a clear list of goals and milestones for when you want your DevOps team to reach those goals. Implementing and monitoring tools like New Relic are key to the success of any DevOps team because it’s these tools that close the feedback loop and let your organization know how the site’s doing.

Results you should expect from your DevOps team

Do you remember the Twitter 404 errors that plagued the site in the early years as they grew? The Twitter Fail Whale was a common phrase back then, because the social network broke down almost on a daily basis.

Then like magic, it stopped. The site outages, The Fail Whale, and the irritations of using a website that always broke down just as you hit publish. That is the power of DevOps.

Using DevOps means never having to worry about the fight between features and stability. A good DevOps team can and will ensure strong feature releases and a stable infrastructure.

Looking for DevOps for your SirsteveHQ hosted WordPress sites?

If you’re considering layering a WordPress DevOps team on top of your SirsteveHQ  Google Cloud powered infrastructure, let me know. I’d be happy to answer any questions you have.

How to use online marketplaces